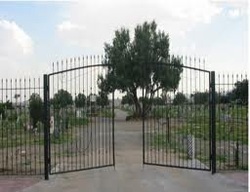 Welcome to the Concordia Cemetery Canyon Hills Humanities Website.  You will take a step back in time and see the importance of the cemetery to not only El Paso, Texas but to the formation of the West in the early days of the United States.

The land that is now Concordia was originally built as a chapel in 1844.  The  Stephenson family(Hugh and Juana Ascarate) used the chapel for religious purposes and functions until his wife, Juana Ascarate, was fatally gored to death by their pet deer.  in 1856, Ascarate's remains were buried next to the chapel.  After her death, other members of the Stephenson family were buried in the area around Ascarate, thus making it a cemetery.  Stephenson then erected a number of buildings and houses on the present day site of Concordia.

In 1867, Fort Bliss suffered damage from a great flood and was moved to the Concordia Land.  It was known after that flood as Camp Concordia.  The description used to convince the Army to use Concordia land was, "entirely above water and free from quicksand."

In the 1880's, El Pasoans would trek the three mile journey to the cemetery to bury or visit loved ones interred at Concordia.  By the late 1890's, different sections of the cemetery were purchased by different ethnic and religious groups to bury their dead.  By 1890, the sections within Concordia were designated Catholic, Masonic, Jewish, Black, Chinese, Military, Jesuit, city and county.

Concordia has been home to many people of importance to El Paso, Mexico and the Wild West.  Among those buried include socialites, cattle ranchers, gun-fighters, Mexican Presidents, Priests, Law Men and oddities.

Concordia has opened her gates for all those wishing to lay in eternity and has refused no one.  Her history is unique and rich in this west Texas town of El Paso.